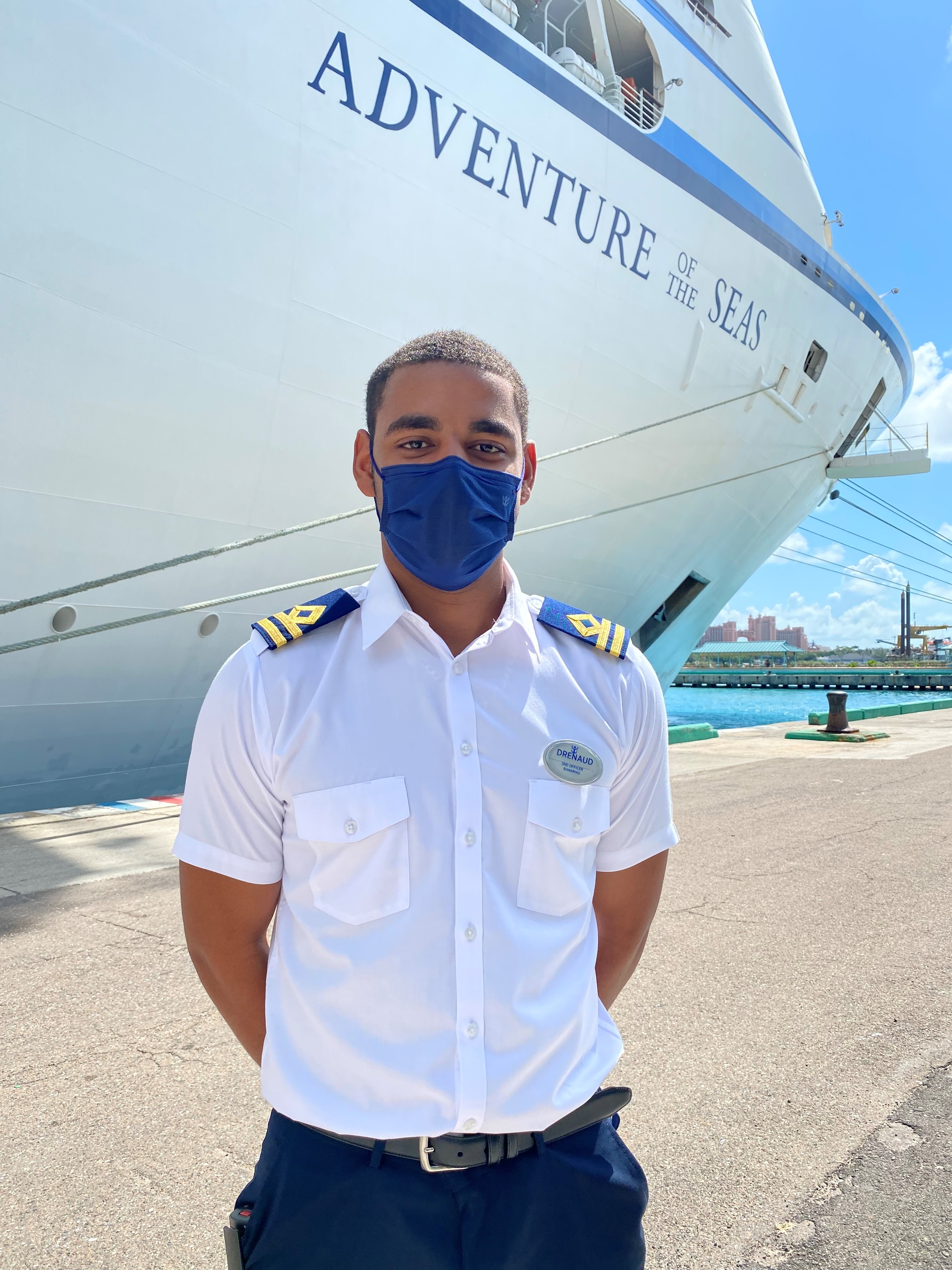 At Nassau Cruise Port Ltd., we take great pride in seeing Bahamians excel, especially in the maritime industry. On Saturday, August 7, we caught up with Drenaud Moncur, Jr., native son and recent graduate of the Maritime Institute at Memorial University of Newfoundland, who has just been appointed Second Officer on the Royal Caribbean vessel, Adventure of the Seas. In this quick interview, Drenaud shared his excitement about seeing Nassau “from the other side” while the vessel homeports in Nassau, described his educational journey, and shared some advice for getting ahead in the industry and in life.

Q: What do you do on Adventure of the Seas?

A: As Second Officer, I am a part of the safety team, and I am the supervisor of life-saving apparatus. This includes managing the life jackets, emergency radio communications, lifeboats, rescue boats, life rings and more - anything that has to do with safety. Additionally, I'm a part of the bridge team that ensures the safe navigation of the vessel between ports.

Q: How did you become interested in a career in maritime?

A: When I was very young, I went on a cruise (coincidentally, aboard Royal Caribbean's Liberty of the Seas) and it piqued my curiosity. I started looking into careers in the maritime field – cargo ships, cruise ships, and so forth – so I decided to join the Maritime Cadet Corps in high school which furthered my knowledge. Once I decided that this was the path that I wanted to go down, I made the decision to attend the Marine Institute in Newfoundland, Canada, where I received my diploma of nautical science and a bachelor's degree in Maritime Management

Afterwards, I worked on bulk carriers, oil tankers, seismic ships, and others. Since I wanted to come back home to work, I applied for a job on Adventure of the Seas.

A: They give students in grades 10 – 12 basic knowledge of the maritime industry in subjects such as seamanship, firefighting, basic navigation, and these kinds of things to set a foundation for us if we decided to pursue a career in maritime. They also assist you in going to university and they can help you and guide you in the right direction.

Q: What subjects should a high school or university student who is interested in earning a maritime degree or diploma take to ensure their success?

A: When I was in grade 9 at Aquinas College and I had to choose my electives, I chose Geography (of course, because we’re navigating), Physics, Math, and Spanish. I wanted to make sure that I had a second language because I anticipated working with crews of different nationalities. I would also suggest Chemistry because there is chemistry involved in times as well. English skills are also very important – in your first year at maritime academy, you have to take a technical communication course which basically teaches you the best way to write procedures, create manuals, SOPs, and helps you familiarize yourself with all the technical writing terms.

After my first year, the Maritime Academy, I had to take subjects like Navigation, Seamanship, Technical Drawing, etc. Then it gets more in-depth and job-specific Simulated Electronic Navigation, Cargo Operations, Security courses, radio courses, etc. It only takes about four years. One of those years must be spent at sea. I spent two of my twelve months on a seismic ship off the coast of Canada, then I spent time on an oil tanker in a similar area off the Canadian coast. I spent the rest of that time on an international bulk carrier that went between Canada, Europe, South America, Africa, and Asia. On my final vessel, we were up north in the Arctic on an ice breaker bulk carrier. And now here I am!

Q: What path do you want to take in your maritime career?

A: The path that I want to follow is to be a Captain. There are several jobs that you have to fill and licenses that you have to earn to get to that position. I’m in no rush – I want to take my time and learn each position thoroughly so that when I attain that top position, I’m able to effectively serve my team and lead them in the right direction. You would generally go from Second Officer to First Officer to Chief Officer, then Staff Captain and probably Captain.

Q: What’s the most exciting thing about working on a cruise ship?

A: The navigation part. That’s the part that sparks my interest the most. Being able to move such a large vessel across such a long distance in such a short time is very exciting. However, every aspect of the job has its perks. I feel that safety is very important, so being an instrumental member of the team that ensures that we can respond effectively in an emergency grasps my interest as well.

Q: Which other places are you looking forward to visiting as a part of the Royal Caribbean team?

A: To be honest, I’m open to any opportunity that comes my way. I was really excited to come into Nassau, because to be able to be on the ship, especially on the bridge, and to see it coming in from that angle was very interesting for me. I really love Europe – places like Spain, Germany, the Netherlands, Norway, and I also want more experience sailing in parts of Asia as well.

Q: Who would you say really made a difference in helping you make this career choice a reality?

A: My parents – Tanya Moncur and Drenaud Moncur, Sr. - they were always really supportive. As soon as I told them that I was interested in a maritime career, they did whatever they could to help me. For example, my high school did not offer access to the Maritime cadets’ program, but when I told them that this was the area that I wanted to pursue, my dad went to C.R. Walker and spoke to the program director to help me get enrolled in the Maritime Cadets Corps. From taking me to program classes and doing whatever they could to give me more exposure to the industry, my parents were instrumental. I wouldn’t be here without their support.

Q: What advice would you give to anyone who is interested in this career path?

A: Stay focused, set a goal, and keep striving towards it. That's the most important thing. Try not to get distracted. Set your goals early and take steps toward your goal until you achieve it.