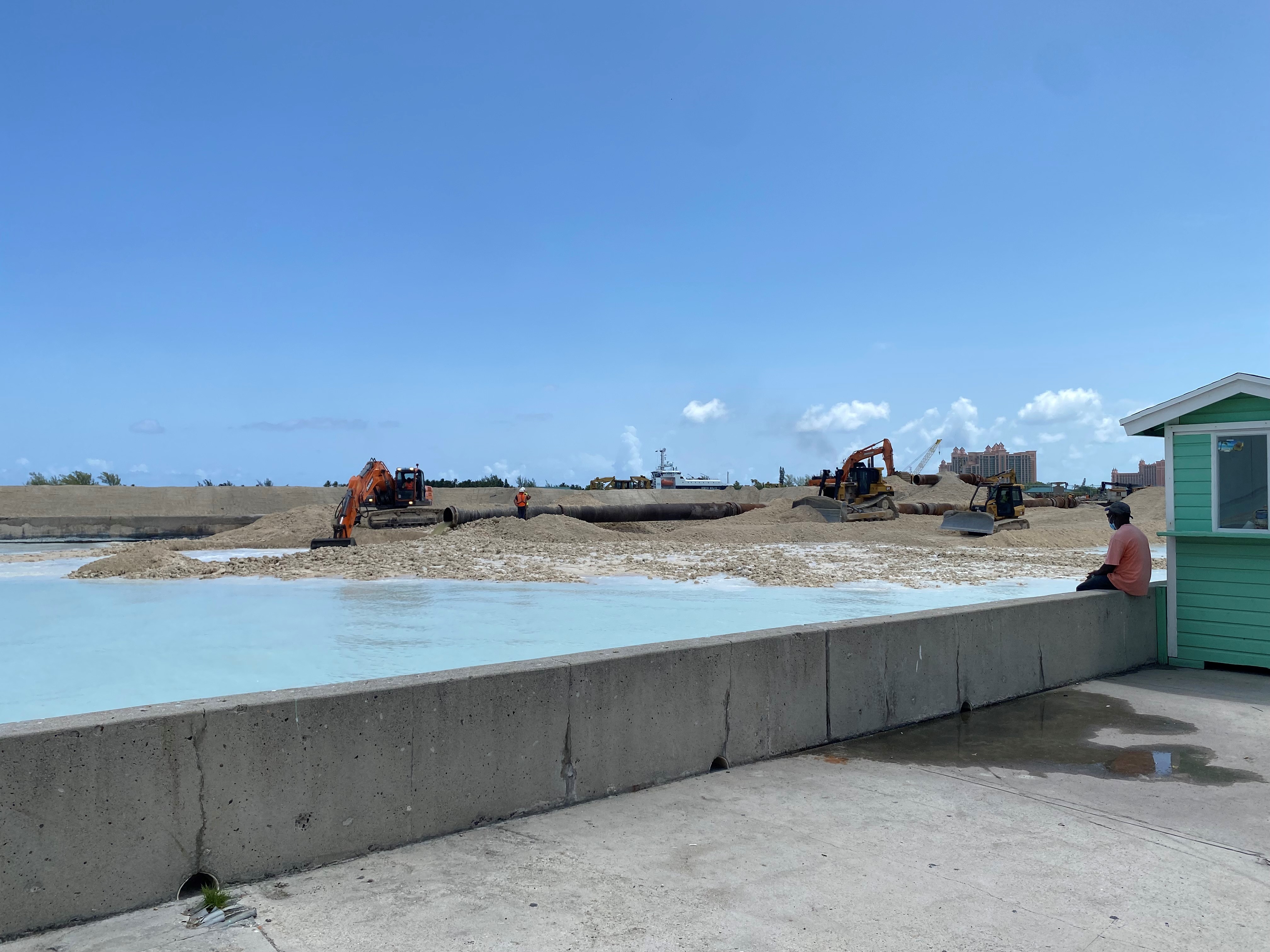 28.07.2021 Dredging and Land Reclamation Key to Increasing Passenger Count to 33,000 Per Day at Nassau Cruise Port

Nassau Cruise Port has commenced dredging of several key areas of Nassau Harbour that will significantly boost the economic impact of the port redevelopment project. This activity was publicly announced in early July by the Ministry of Transport and Local Government through the Port Department, and previously presented during the Town Hall Meeting. The works are being conducted in four areas including dredging of a new Oasis-class berth on the northeastern cruise pier extension; the creation of a new mega yacht berth, also on the northeastern pier; maintenance dredging to accommodate Quantum-class vessels on the passenger pier; and dredging at the rehabilitated “Prince George Wharf” pier, which is also being extended, to move from accommodating Dream-class vessels to providing space for the much larger Oasis-class ships.

The sand being collected through the dredging process is being used to fill in the area of the harbour that sits between the Prince George Wharf pier and Navy Lion Road. This sand will be compacted and then rolled into a usable state. The reclaimed area will become the “heart” of the port – the Authentically Bahamian Port Marketplace and the Port Plaza, which will be home to the port vendors, Bahamian retail stores, and related activities.

“This dredging work is an integral part of making the redevelopment of Nassau Cruise Port an economic success for all stakeholders,” said Mike Maura, CEO of Nassau Cruise Port. “The reclaimed area will help us launch Bahamian creativity within the new port serving as the hub of the vendors at the port marketplace. The success of these vendors and the surrounding community is hugely important for us. To this end, we will also construct a dock within the Western Marina adjacent to this reclaimed space, where the water taxis and excursions will both pick up and return guests enjoying tours. This will place the returning guests directly in front of local stores, inviting them to shop and experience more of the city before they return to the ship. This way, they can shop downtown, then shop within the Port Marketplace on their way back. Our aim is to give the downtown community as much opportunity to connect with the passengers as possible.”

Mr. Maura continued, “Our contractor, ENKA, has provided an access channel at the northern section of the dredge area to create a passing route for public vessels as required during the estimated 12 days of dredging activity. All the works are being conducted in accordance with the dredging method statement, which was reviewed and approved by the Department of Environmental Protection and Planning (DEPP). Our contractor has remained true to all aspects of the method statement. An environmental monitor is stationed on site daily to observe the dredging works and to monitor the environmental impact of our entire project as per DEPP requirements, so we are following all requirements accordingly. The environmental monitor and the contractor’s team are also continually monitoring the turbidity of the water, which remains well within required limits.”

Nassau Harbour was most recently dredged in 2009 by Royal Boskalis Westminster N.V., which was contracted by the Ministry of Works to extend and widen the entrance channel to make space for Genesis-class ships. This dredging work, which included the dredging of approximately 1.5 cubic million metres of sand, took six months to complete. By comparison, no more than 154,000 cubic metres of sand will be dredged during the current works being undertaken.

From an operational perspective, Mr. Maura added that, “The dredging will continue to have no impact on our ability to facilitate ships. Our homeporting operation continues to move along very smoothly, and the passenger survey responses provided by the cruise lines strongly reflect that despite being moved through an active construction site, passengers are extremely happy with the embarkation and disembarkation experience here. We expect a strong increase in the number of ships that will visit us heading into August and throughout the rest of the year, which will be supported by various brands including the return of Carnival Cruise Line ships and welcoming MSC Cruise Line vessels.  We anticipate more than 100,000 passengers in August and by December, that number will increase to approximately 250,000 passengers, so the business is building upon itself and we’re extremely grateful for that.”

The construction of the new piers is more than 50% complete, and we will have the ability to place six ships at these berths by December 2021. Additional structures will be added to the piers in early 2022.